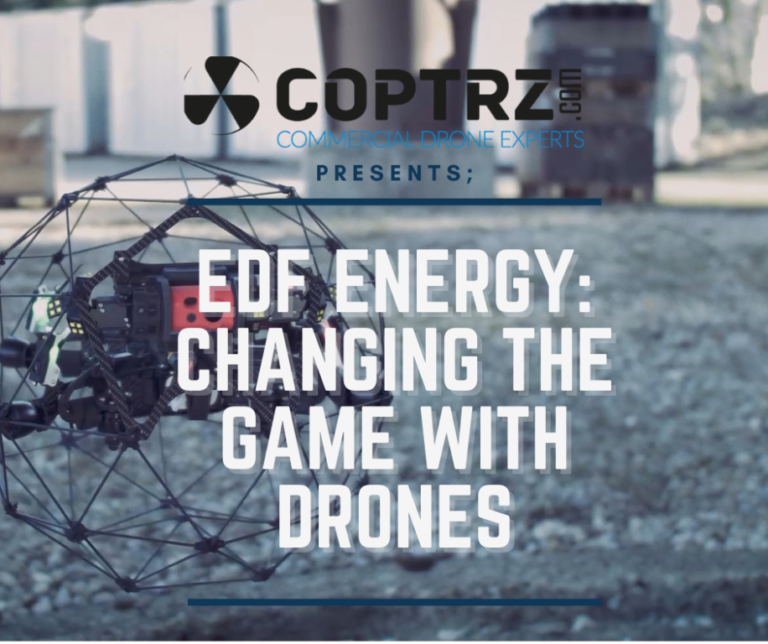 If 2021 is the year that you want to switch your career and start seeing the benefits of using drone technology, look no further than Coptrz.

We truly believe in the future of the drone industry and we want drone training to be accessible for everyone.  We also know that for the industry to grow, it needs every drone pilot to be operating safely and responsibly.

To start the New Year off the right way – we are offering our A2 CofC course for free. Yes, you read that correctly – FREE. Find out more and start your drone journey today by clicking here.

We spoke to Liam McCarter who works as a Mechanical Engineer at one of EDF Energy’s Nuclear plants, the Dungeness Nuclear Power Station. In the last year Liam’s team has adopted drone technology into their asset inspections to cut down-time, reduce risk and increase business efficiency. What are you responsible for at Dungeness Nuclear Power Station?

“We are responsible for short-term breakdowns, responding to operational plant issues within a 48-hour window. If we have a breakdown this effects the planned work we would normally conduct for maintenance. Our role is to protect any planned work and make sure operations are as smooth as possible.”

How did you first come to exploring the idea of using drones?

“Earlier this year we came up with the idea of using drones for confined space inspections when we had a project come in for some pipe inspection work. When we started to look at what was on the market we came across the ELIOS 2.

“The drone seemed spot on for what we were after and a big plus was that you didn’t need a CAA licence to fly it because it’s not in airspace. We are a licenced site so we’ve got quite high regulations which means we do need to be trained correctly at what we are doing and hold the right qualifications.

“Coptrz Trainers visited our site to conduct specialist ELIOS training with the team. After the training we had 8+ operators signed-off to deploy the ELIOS when necessary. We ensured that we had operators who were also experienced in the plant area so that we had knowledgeable drone pilots trained on-site. The drone itself is very easy to operate and we’ve found that it’s quite useful on complicated jobs to have two operators. One person flying the drone and one person watching the alarms on the controller and acting as a second pair of eyes in case you are running low on battery or are flying out of range.” How are drones being used at the plant for asset inspections?

“One thing we’ve be dealing with on-site for the last few years is corrosion. There has been a big focus on inspecting equipment and being quite a complex and aging plant some of the equipment is difficult to reach.

“The ELIOS has come in use on quite a number of occasions for supporting our corrosion inspections. Getting a first look at things with the drone gives us an idea on whether we would need scaffolding or not. The latest job I used the ELIOS for was during an inspection on some pipework up in in a pipe riser. It’s a really tight space and the footage I got was excellent, I also received great feedback from company experts who were inspecting the corrosion of the pipework.”

Are you using both the RGB 4K and the Thermal Sensor on the ELIOS?

“Just the RGB 4k sensor so far. We haven’t had a requirement yet for using the Thermal sensor as it’s mostly visual inspections that we’re conducting on-site. I can see where the Thermal camera would have uses though in the future such as giving an indication of temperature during inspections.”

How do drone inspections compare to more traditional methods?

“Normally we’d use rope access or traditional methods like scaffolding access. The ability to get a video recorded of inspections done by drone gives us more information to supply to our stakeholders. When we send the footage off for someone to review they have a better idea of where the asset is located on-site.

“One of the Civil Inspectors I sent some recent drone data to recently fed back that it was very useful having footage that they could move from one place to the next. Beforehand they would work from a set of images which potentially leads to missing bits out, so the 4k recorded footage has made our inspections a lot more thorough.

“Using the drone has also given us an extent of condition report and simplified the process of the inspection. Inspections at height or in confined spaces now only require a quick inspection of the drone before deploying so it’s much quicker than traditional methods.” How has deploying drones during your inspections impacted safety?

“The original decision to start using drone technology was spear-headed by the need to reduce risk in confined space inspections. We wouldn’t have been able to access many of the areas we needed to get to without shutting down whole areas of the plant to make it safer for the engineers. Using the drone has enabled us to get quickly into an area we need to inspect in a short space of time. What we would have had to done before using the drone to go down one particular tunnel for example would be to install escape access at the other end of the tunnel which means removing large amounts of plant, we only ever do that during a major outage.”

Did anyone at your company have reservations at first about adopting drone technology and if yes how has their opinion changed since you started using the ELIOS?

“I think most people’s views at first prior to using the ELIOS was that the drones were toys. After seeing the 4k footage and the value it’s added to our inspections in terms of time and safety they’re fully on-board with us adopting it as an innovative tool for the business. I think over time the other nuclear power stations will start adopting drones too now that we’ve set the standard.”

If this blog post has inspired you to find out more about how you can incorporate a drone solution into your organisation, you can download our drones for inspection brochure here.

You can also contact our team of experts who are ready to help start your UAV journey.

What is an A2 CofC (Certificate of Competency), and why do I need one?