As the world of technology continues to evolve, police forces are constantly required to expand their capabilities to effectively pursue criminals, protect the vulnerable, and reduce crime.

In a new era of policing, with increased access to funding (after the lull of 2011-17), organisations can now look to allocate finances towards new and innovative technologies that aid frontline officers.

Drones, with interchangeable payloads, offer a helping hand to public safety institutions to gain new perspectives that were previously impossible.

With reductions in area search times, increased capability to collect valuable evidence and an enhanced ability to respond to reactive operations, West Midlands Police (WMP) have reaped the rewards of being early adopters of drones.

“The drone project started back in 2017. It was just one person and one drone, a person who had seen the future and the benefits of using the technology, and it really has grown from there.”

Thanks to @Coptrz for a great demonstration of the fantastic @DJIEnterprise #M30T pic.twitter.com/rgxbbSRBgU

Since then, their drone team has grown to 46 pilots with 15 aircraft currently in operation, including industry favourites such as the DJI Mavic 2 Enterprise Advanced and DJI Matrice 300 RTK.

How is drone technology used by police?

With over 7,000 officers covering 348sq miles, West Midlands police are currently the 3rd largest police force in the UK.

Sgt. Bennett’s drone team provide support 24/7 across all departments of the force, including traffic, neighbourhood response and firearms, for any incidents that require an eye in the sky.

Utilising this technology has enabled the team to search and find offenders and evidence in areas that could have gone unseen without an aerial view.

The video below shows the moment a large knife was found in the guttering at the top of a house, which would have been impossible to see from officers on foot.

In January 2022 a large cannabis farm was detected in the heart of Birmingham. The farm itself spanned three stories of the building, totalling 3,112 plants, and amassing a value of £3million.

“There’s a lot of organised crime that sits behind these cannabis factories, so finding out who’s responsible for them is really important to us,” said Sgt. Bennett.

The three men, who were believed to be in the country illegally, were later charged with cannabis cultivation.

Below shows the moment two individuals fled the scene in an attempt to evade officers, before being captured.

One of the largest areas in which the force has seen benefits is the use of the technology within pre-planned operations.

Among many of the West Midlands sporting facilities, the force services Aston Villa, Birmingham City, Wolverhampton Wanderers and Edgbaston cricket ground. Utilising the DJI Matrice 300 RTK and an external screen, operators can survey the grounds while spectators are entering and leaving the venues, and feedback to ground support officers to tackle incidents.

The video below shows insight into perspectives that drone technology provides to police drone operators during events.

Across the United Kingdom police forces have had to focus on building trust within their communities. Evidence finds a strong relationship between trust & confidence, and the willingness of the public to cooperate with officers.

By demonstrating their trustworthiness to the public, the police can strengthen their social connection with citizens, and thus encourage more active civic engagement in domains of security and policing.

So what is a trustworthy police force?

A trustworthy police force is seen by the public to be effective, to be fair, and to have shared values, interests and a strong commitment to the local community.

“It’s been really important to us for us to share our successes and to inform the public on what we’re doing with drones in the West Midlands, so you’ll often see us at community events, schools and festivals.” says Sgt. Bennett

Always lots of interest in the drones when we’re out and about! pic.twitter.com/10rUePVA4U

“Anywhere we can go and tell the public what we’re doing and show them the technology really improves the legitimacy of our programme.”

Throughout 2022, the West Midlands Police drone unit (among other departments) have been visiting schools within the community, showcasing the drones that the team will be using during the Commonwealth Games to ensure a safe and secure event.

“We use the technology to try and build relationships with some of the young people who potentially see the uniform as a barrier to talk to us, the same way our dog teams have done in the past. It’s really really worked.”

“I’m hoping that some of them will go home and say ‘you know what, I met a really nice cop today – and he was just a normal person’. We just want the kids to be able to talk to us as the people that we really are.”

It was our pleasure to join local officers to visit @whitmore_park today to meet the wonderful reception children and their teachers. Thank you for inviting us. @DaveThompsonCC @SarahBurtonWMP https://t.co/E5ywnjl4Zn

This summer Birmingham will play host to the Commonwealth Games, with over 1 million people expected to travel to the city for the event. To ensure a safe and entertaining event for all, over 3,000 officers across firearms, traffic, and counter-terror will be called upon.

“This summer we’re extremely excited to be hosting the Commonwealth Games, and the drone unit will be incredibly important in keeping the community safe.” – Sgt. Keith Bennett.

From providing situational awareness to ground teams to detecting rogue drones trying to disrupt the games, the drone unit will be on hand to tackle any disturbances at the games.

What drones are best for policing?

With most recent data showing a rise in total crime in the UK of 14% between Sept 2019-Sept 2021, a self-sufficient approach for officers has become increasingly important. Smaller aircrafts such as a DJI Mavic 2 Enterprise Advanced or Parrot ANAFI USA can fit snuggly into a squad car and can be deployed rapidly.

Utilising a DJI Mavic 2 Enterprise Advanced, West Midlands Police were able to apprehend 2 males who had been attempting to steal from some storage units. A quick response time can be the difference between a perpetrator being caught or escaping, but thanks to the M2EA being deployable in under 60-seconds, both men were detained.

Duty drone out assisting @ResponseWMP @WillenhallWMP with 2 males attempting to steal from industrial units. Thought they could hide from the eye in the sky but they couldn’t. Officers talked in and both detained, one even tried to swim away! #dronesforgood gs pic.twitter.com/xazhIwUic8

The DJI Mavic 2 Enterprise Advanced boasts an impressive 31-minute flight time, high-resolution RGB & thermal cameras and powerful zoom capabilities that enable the operator to view up to 1km away. The drone also comes with speaker, beacon, and spotlight attachments, providing a whole host of additional capabilities compared to other drones in its class, from communicating with missing persons to lighting up the scene at a road traffic collision.

The ANAFI USA is a powerful quick-response quadcopter that shares many of same the features as the DJI Mavic 2 Enterprise Advanced but comes in at just over half the weight. With a 32-minute flight time, the ANAFI USA offers one of the highest flight times in its class. It’s also not limited to dry flights. Due to its IP53 rating, it can fly in light rain and wind. Paired with how quiet this drone is, you have a perfect solution for covert operations for Police forces in the UK. Above shows the clarity of the zoom capabilities from the Parrot Anafi USA from: Distance=290m Height=120m

Pre-planned operations constitute operations missions that require optimal cooperation, coordination, and flexibility. They rely on a systematic collection of information, assessment of the situation and issuance of directives and orders in addition to directing and controlling the execution.

The DJI Matrice 300 RTK is one of DJI’s largest and most feature-packed drones. With 3 mounts and a high payload capacity, the M300 is the vehicle needed to operate highly versatile missions that would regularly require multiple drones or flights.

The drone requires two batteries, which make up the majority of its 6.3kg weight. The dual-battery set-up increases the aircraft’s redundancy as one battery can supply enough power to the drone for it to land should one fail. The M300 is IP45 rated, protecting it against rain, sleet, and snow, as well as high volumes of dust – perfect for the unpredictable weather in the UK.

But where would the DJI Matrice 300 RTK be without its partner in crime, the Zenmuse H20T?

The H20T provides operators with maximum flexibility during a single flight, offering 4 sensors in 1. 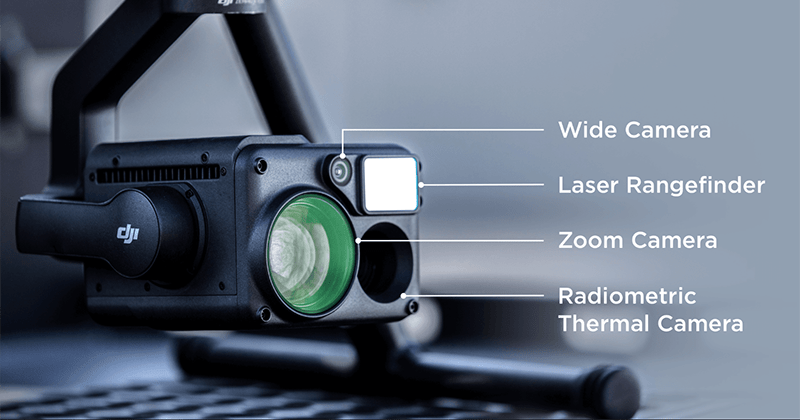 Capture everything, up close or from a distance – in true living colour or thermal. This powerful payload integrates several AI smart capabilities, including active target tracking and coordinate pin-pointing.

The DJI M30 Series is designed specifically for everyday heroes.The M30 & M30T encompass the power and performance of the DJI Matrice 300 RTK into a Mavic style frame, increasing portability. By doing this, the same quality data that is obtained with the M300 can be gathered with a drone weighing nearly half of it.

The sensors include the traditional 12MP wide-angle lens, 640 x 512px thermal camera (M30T only), and 1200m laser rangefinder, but also now include a 48MP zoom camera, compared to the 20MP zoom camera on the H20T. 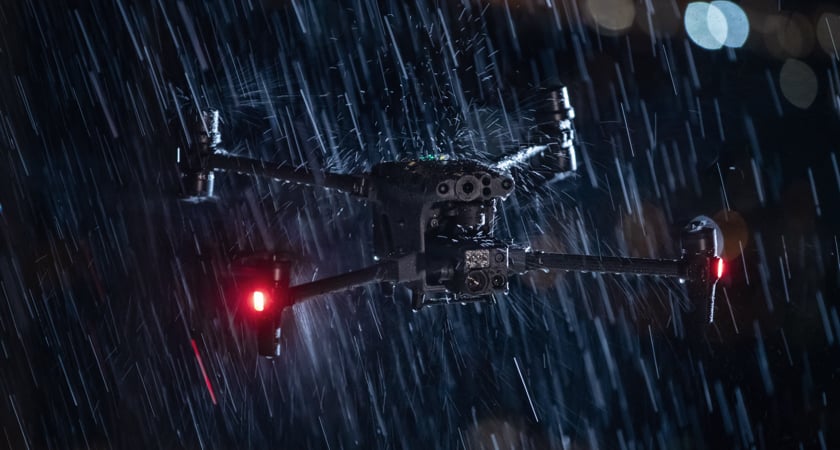 Get in touch today!

Drones have revolutionised the way police forces operate, providing situational awareness, rapid response and a means to communicate with far away targets.

If you require any more information on any of the products or applications above, please feel free to get in contact with our team today!